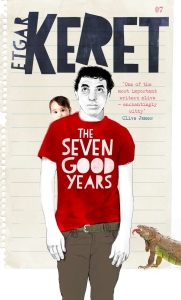 Etgar Kerets new book is autobiographical, but the mixture of the absurd and hilarious with the tragic, is very keretesque (Review in Swedish). We asked the author a few questions.

Your new book is a very gripping memoir, The Seven Good Years, spanning the time from the birth of your son to the death of your father. It’s a departure from your special brand of short fiction, with elements of the surreal and fantasy. Was this an altogether different book to write?

– Yes. It didn’t start as a book but as a bunch of pieces which I wrote about my son’s birth and baby days, telling myself I’ll show it to him when he’ll grow up. I published some of them in the NYT and other places but their offical function was to keep them for family’s history sake. The real reason, I guess was that they could help me reflect at hind sight on all those important and confusing moments a first time parent has to deal with. I’ve only decided to turn it to a book when my father was dying from terminal cancer. His death was the real trigger to collect all these pieces together.

I think there are similarities between Suddenly a Knock On the Door and the essays in The Seven Good Years. You can be pretty sure that something very unexpected is about to happen. Is this an essential feature of reality as you percieve it or is it a necessary feature of a good story?

– I see life as something that is totally unpredictable both in a good way, being full of imagination and creativity and kindness, and in a bad way with arbitrariness and violence lurking behind the corner. This is how real life feels like and when i write fiction I try to write the stories the same way I feel real life is.

I have also enjoyed the stories you have somtimes told about your mother and father, at readings an such, they were both survivors of the Holocaust. But your parents seemed to have a very positive outlook on life. How has your father influenced you and your writing? Can you share with us a brief story about him?

– My parents had always said that because they have experienced the Holocaust as children they came to their grown up life with very low expectation from humanity and had , since then, been surprised for the better. This was their explaination for their conssitent optimism and belief in mankind. I think that the fact the they never had a normal childhood had made them remain children in a way, not completing the normal process of growing up and rebelling against their own parents (my mother had lost all her family in a very young age).

– The strange paradox was that as children they had to be very adult, being constantly in friction with great suffering and violence, but they had stayed in this old child mode all their life, keeping the child in them alive throughout their entire life. Until his last days, nothing had pleased my father more than going to a swimming pool and buying a posical or an ice cream there. His attitude toward that had the pure happiness you would usually only find in a child. In the film Jellyfish my wife, Shira Geffen, and I had gave him the role of the ice cream man who sells ice cream at the beach and just before the first shot we discovered we had a problem: My father, who had been almost eighty at the time of the shooting had eaten all the ice cream in his box during the rehearsals for the scene.

Have you found that your writing is viewed differently from country to country? As a writer who occasionally writes about Israeli politics, are those pieces received differently in, say, New York than in Israel?

– For sure, When I write my opeds I actually feel that people overseas are more attentive and curious, picking the nuances, while Israelis  seem to ignore the story and emotional sentiments in the piece, clearing all the ambiguities in the piece away, trying to come up with some bottom line, clear, ideological statement which they could either support or resent.  I must say that unlike fiction that is a totally positive experience for me, writing opeds always feel like an unwanted chore. Something which, whatever you’ll say, will end with one group of people or another calling you a traitor or an idiot.

How has it affected you becoming a father?

– Before becoming a father I was only interested in the present. Thoughts like: ”Where will my country be in ten years” had never came to mind , but becoming a father I find myself thinking a lot about the future and , also, failingly and very pathetically, doing my best to change it for the better.

Whats next? Have you written more fiction lately?

– I’m currently working on a TV series my wife and I are developing for the French TV channel Arte. It is a series about Real estate, death and time traveling.

In our archive there are links to several wonderful short stories by Etgar Keret. His short story collections are strange, beautiful and seriously addictive.